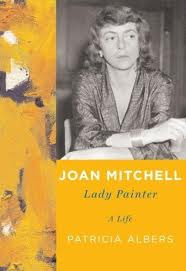 Last year I read the big DeKooning biography and the similarities of their lives is inescapable. Both painted big,bold expressive canvases and both were in NY in the 1950s and 60s. Both mingled at the Cedar bar with other artists, musicians, poets and writers of the era. Both drank much, much too much but still managed to create sublime paintings and have successful careers.
And how many more of us recognize the name Willem DeKooning and saw his work in their art history texts then know the name Joan Mitchell?
I was fortunate to see the big Mitchell retrospective at the Whitney in 2002. I went with a friend who is not big on contemporary art. We both were absolutely blown away by the sheer power and beauty of her work. I am a generation younger than Joan Mitchell,and a painter who has worked in the art world since the 1970s. I certainly knew who Joan Mitchell was and had seen her work occasionally at museums or exhibits.I think I, like many other accepted the generally held description of her as a "second generation abstract expressionist" which clearly meant that she was 2nd tier. In the 70s and 80s with the growth of the feminist movement in art her work was "rediscovered" as museums sought to include women artists in exhibits and collections. Joan was certainly uneasy with this, as the author describes in the book.
This is one of the best written biographies of an artist I have read. It reads like a novel, yet it is carefully documented and footnoted. I might quibble that the author often relied on one source who may have been biased, in some of her facts, but the strength of the book is its power in describing Joan life and her times. I was lucky to have the catalog from the exhibit so i could see many of the paintings. As always with artist bios, seeing the work described is very important and frustrating if it isn't available. Will publisher's start using the power of the internet to provide links to images and will the Kindle get some color so we can read books and see the artwork? Stay tuned...
Posted by Katharine Smith-Warren at 12:42 PM No comments:

Find a place to stay in Allenspark

My Exhibitions: current and past

Katharine Smith-Warren
Point of View: Plains Series 2013 The semi arid plains of eastern Colorado are exceptional places. There is a near mystical atmosphere of air,light, wind and space. The ratio of sky to land is one of the purest expressions of the Pythagorean ideal of the fundamental order of the universe through geometry. As an artist who is attracted to the abstract i have painted the stripped down plains, what I see and feel as the essential experience that draws me back to the plains time and again. It is the harmony of color and light, the power of the sun, the ever changing clouds all set against a subtle landscape that dwarfs human endeavor. Each painting is about a place that become imprinted in my mind.Sometimes it is just about light and color, the way shadows play on a building at a particular moment. I suppose the image becomes a muse for me. I achieve ownership and acknowledge that the place is now mine for a moment, if only transformed in my painting.